The first six weeks of 2020 have seen a continuation of the strong market returns experienced during 2019. In fact, the +4.5% return would equate to an annualized increase of over +38% if the frenzied pace continues. While investors cheer higher values in their portfolios, we take a deeper look behind the scenes to discover that speculation is becoming more apparent and a cautious stance at this stage in the cycle is warranted. 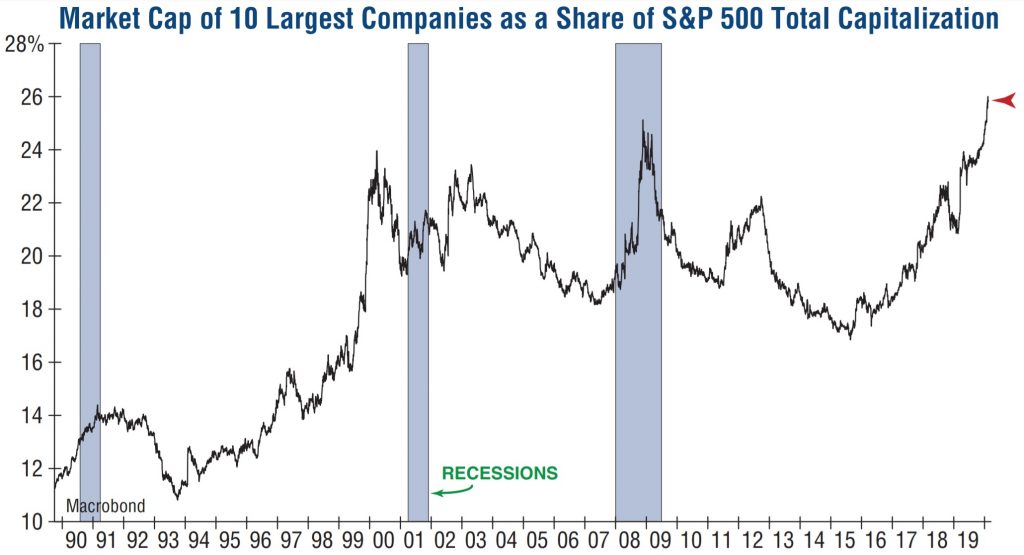 Historically speaking, the internal quality of a market advance is critical, and analysis of market leadership can help investors draw conclusions about the likelihood of future market gains. The chart at left is a good measure of leadership depth, as it shows the market capitalization (i.e., stock price times number of shares outstanding) of the 10 largest companies as a percentage of the total capitalization of the S&P 500. A low reading means that changes in the S&P 500 Index are being driven by price changes in a large number of stocks, while a high reading indicates that a much smaller group of stocks are accounting for a substantial amount of market action. This indicator recently reached an all-time high as mega-cap stocks are dominating the investment landscape. As more people hold fewer stocks, we question the viability of the current market rally and, more importantly, how narrow the door might become if everyone decides to exit at the same time. 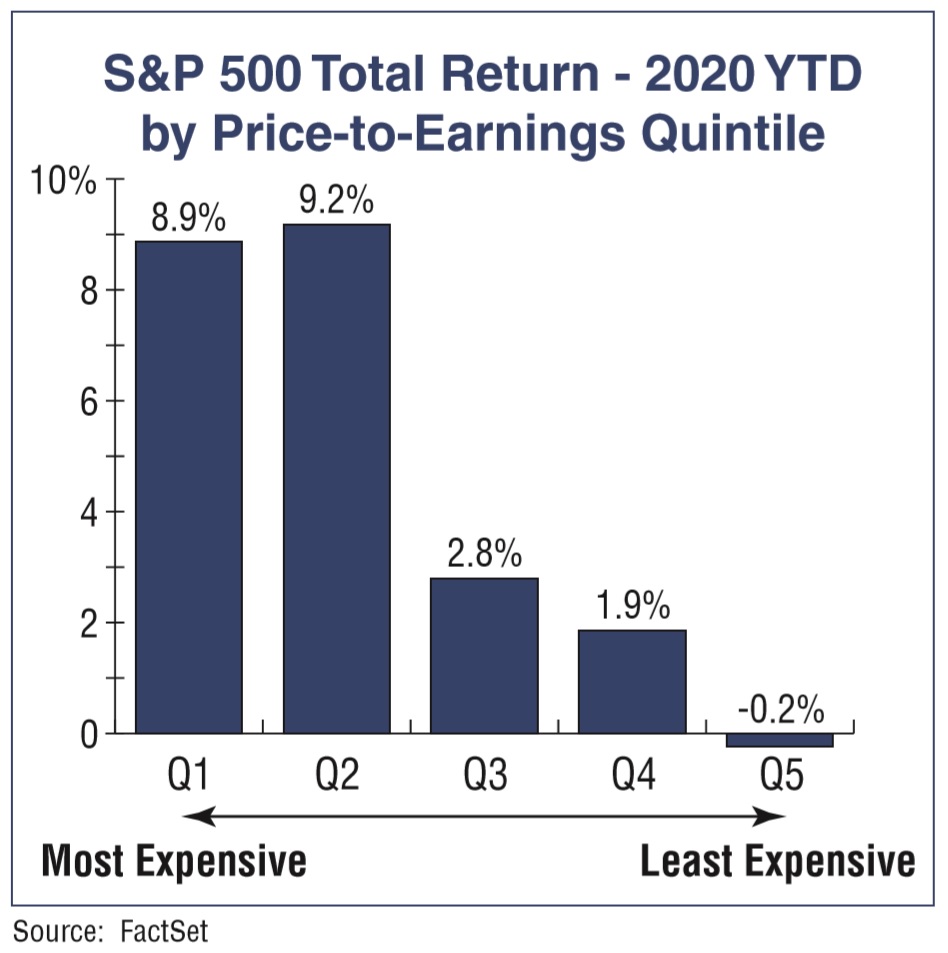 In addition to market leadership, valuation metrics are typically utilized to help guide investment decisions. Thus, we took our analysis a step further and uncovered an interesting phenomenon that is taking place during the first part of this year. The chart at left sorts the constituents of the S&P 500 Index into five different buckets (quintiles) based on Price-to-Earnings (P/E) Ratios. Year-to-date returns were then calculated for each quintile. We discovered that for the first six weeks of this year, the top two quintiles (highest P/E stocks) have outperformed the rest of the overall market by a historically large margin. Stated differently, the most expensive segments of an already expensive market are leading the way. Conversely, the relatively “inexpensive” segments (P/E quintiles four & five) of the market are lagging by a significant amount.

For comparison purposes, we ran this same analysis on a yearly basis going back to 1998 to see how prevalent this relationship has been. The table at right shows a year-by-year break down of P/E quintile returns from 1998 until 2020. This data is utilized to calculate the final column which reflects the difference between the average of quintile one and two (most expensive) and the average of quintile four and five (least expensive). As you can see, there have only been a handful of times when the highest P/E stocks have outperformed by such a substantial margin, the majority of which (1998, 1999, and 2007) have been at the tail end of a bull market.

While each market cycle is unique, investor behavior eventually transitions from sound fundamental analysis to outright speculation. The conclusions we draw from the data highlighted above are twofold. First, while actions by the Federal Reserve have no doubt elongated the current cycle, we still believe this is a late-stage bull market and an emphasis on risk management is imperative. Second, our disciplined approach to portfolio construction at Stack Financial Management –which combines macroeconomic views with bottom-up stock selection using our proprietary SFM Scoring process– becomes even more important going forward. 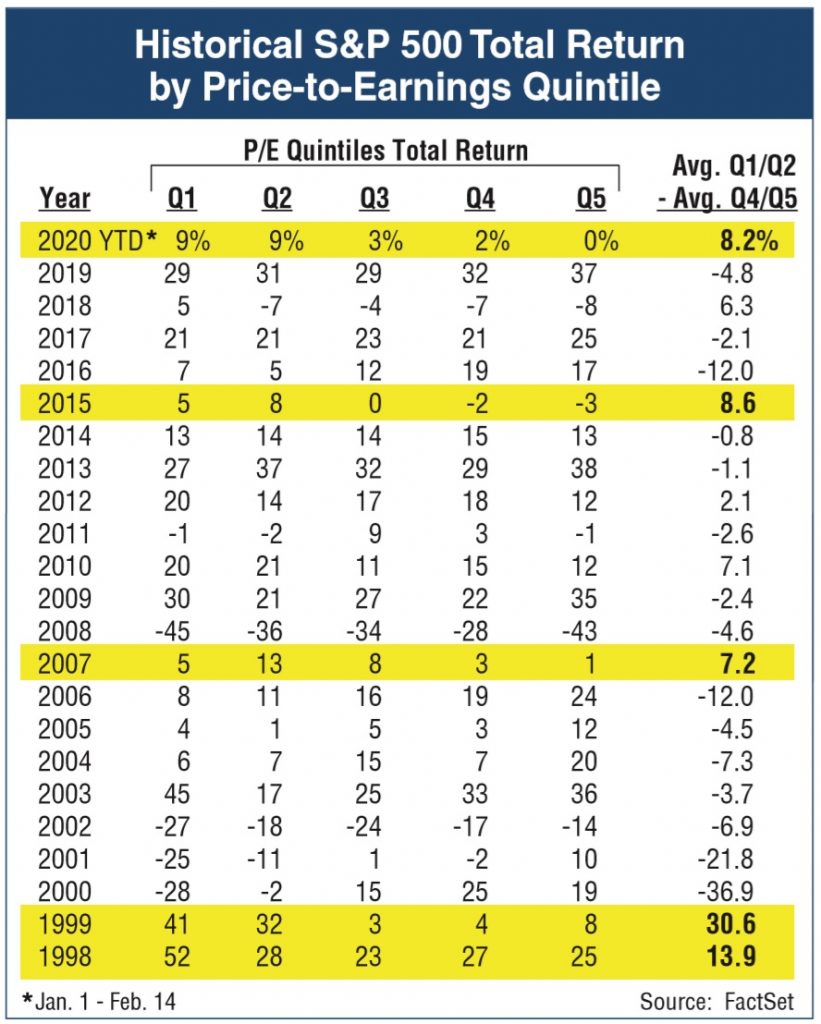 IMPORTANT DISCLOSURE INFORMATION
Past performance may not be indicative of future results. Different types of investments involve varying degrees of risk. Therefore, it should not be assumed that future performance of any specific investment or investment strategy (including the investments and/or investment strategies recommended and/or undertaken by Stack Financial Management, Inc. [“SFM”]) will be profitable, equal any historical performance level(s), be suitable for your portfolio or individual situation, or prove successful. Stack Financial Management, Inc. is neither a law firm nor accounting firm, and no portion of its services should be construed as legal or accounting advice. A copy of SFM’s current written disclosure statement discussing its advisory services and fees is available upon request.